Thrown into the Deep End a journal of my journey

Toll Roads, Turnpike, and Me 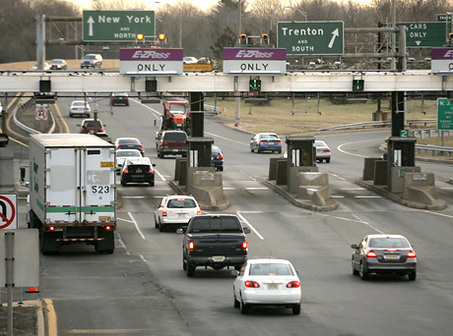 This week I spent some time in New York for a conference. It was my first trip away from my “home”, otherwise known as the friendly confines on my area. To get there I got a crash course in the Turnpike. First off, why do we have to pay everywhere we go here? For those that do not live near a turnpike, its like a freeway except you have to pay depending on how far you traveling. The other ting is that there are a very limited amount of exits. For instance, I live at exit 4 and exited on exit 11. Well, that was almost sixty miles or so. Weirdly, there are speed limits but everyone just seems to blow through it. I was cruising at 70 or so and huge trucks were blowing by me! Geesh.

Secondly, I encountered something called a toll road. Apparently whenever they feel like it they can set up a toll booth and charge you a buck, then ten miles down the road charge you a buck again. What makes it even worse is that they charge you to exit too! It’s only .35 but who carries that exact change. You only have the choice of the EZ Pass or exact change in some locations. Apparently, on a toll road you have coins (whatever they are), EZ Pass, or cash. When you do not know these things you end up in a coin only line…. since the cash one is on the other side of twelve lanes. Then you stuff a buck into the coin slot and hope that it works. Probably not so…. who knows.

Did I mention that I hate paying for tolls? Learning a new way of life in New Jersey.

Family day at the paintball field breaking in the kid.
Showed up for the game... and realized it was tomorrow. Also had the small problem of not having a ticket. #notreally #gettinggear
Gathering and worshiping this week with the #1001nwc coaches as they support and encourage leaders across the country.
Gotta love the slight detours on trips to hangout with old paintball friends.
Off season is over. Time to pack the bag for the first trip of the year. #1001nwc #roadlife
Guess which object completed my home office?
Posted @withrepost • @weeatatdisneyland The Child // Trader Sam’s Enchanted Tiki Bar #themandalorian #thechild #disneyplus #disneyland #tradersams • More info ➡️ This cocktail has pineapple and coconut-y flavors so it’s pretty tropical, but not at all too sweet! Unfortunately we do not know what exactly is in it. The eyes are blueberries that have a sweet coating on them. Available at Trader Sam’s at the Disneyland Hotel. Not on the menu, but ask the bartender for “The Child” or even just “the Baby Yoda drink” 💚🥂
From 2010 to today is a world of difference. Being a “Levi Specialist” at Macy’s and having to try on every style of jeans in order to effectively talk about them. It wasn’t a great situation after graduating seminary and spending a year looking for my first call. A seven year stint in New Jersey followed and allowed me to serve with an incredible team. Our family has continued to grow, mature, learn, and be supportive of one another. Ten years later has me at an awesome job that allows me to grow. Wonder what happens in ten more? #grateful
Closing the year by sharing about being jars of clay.
Wrappin’ presents. Party on.